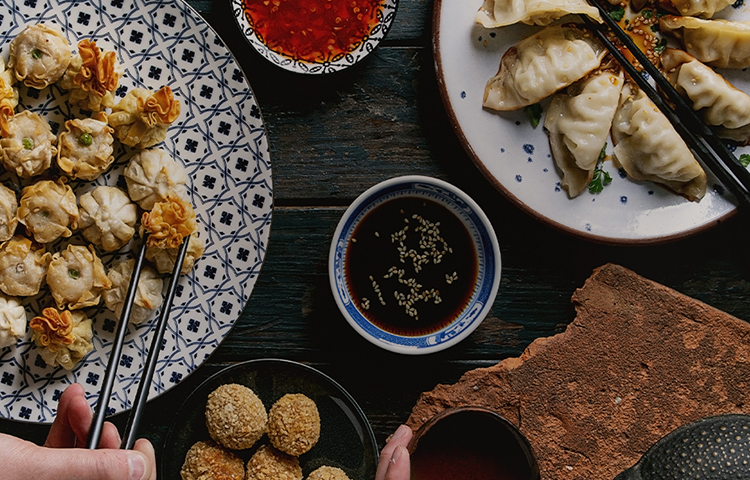 Dumplings, one of the world's most popular dishes
Let’s go on a dumpling tour of the world!

When watching movies, you can often see scenes where non-Asian characters eat dumplings with their clumsy handling of chopsticks. You may also have seen menu items at famous restaurants you visited overseas that are technically dumplings but go by different names, such as dim sum and mandu. Italy’s ravioli and gnocchi also look like dumplings at first glance. Like this, you can find a variety of dumplings all over the world. Then, the question is, what made dumplings become a dish so loved and enjoyed by people all over the globe?

Dumplings, a dish embraced by people the world over
Let's learn about dumplings, a wrapped dish
whose taste and name vary widely by country. 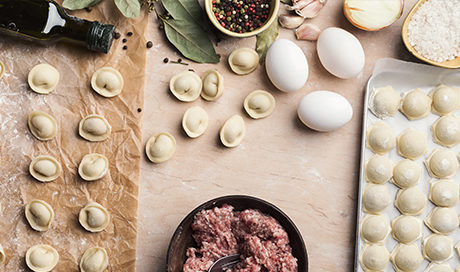 Various wrapped dishes
from around the world

Mandu(dumplings), a Korean style wrapped dish whose ingredients and cooking methods vary by type.
Dumplings are a dish created by stuffing fillings consisting of meat, various vegetables, etc. into thin wrappers made by kneading dough. There are many different types of dumplings depending on the filling, and the ingredients used for filling reflect not only the region’s unique characteristics but also the individual’s tastes. Therefore, the appearance and taste of dumplings can vary by region and household. In addition, dumplings can also be divided into fried dumplings, steamed dumplings, boiled dumplings, and so on depending on the cooking method.

Despite there being diverse opinions on the origins and names of dumplings, you can say that dumplings are a dish originating from all around the world, because having an assortment of ingredients wrapped in grain-based dough is the most basic of cooking methods. If dumplings were to be defined as a dish made by wrapping ingredients in dough or a dish consumed in such a manner, there would be an enormous variety of dumplings in the world. Italy's ravioli is cheese and meat wrapped in pasta, so in theory, it can be categorized as a form of dumplings. Likewise, spring rolls, which are often enjoyed together with pho at Vietnamese restaurants, can also be considered dumplings.

As various cultural experience programs and concept-based tours are all the rage these days, now is a good time to go on a dumpling gourmet tour of the world.

Dumplings from around the world;
how many of them have you tried?
Wrapped dishes from diverse countries 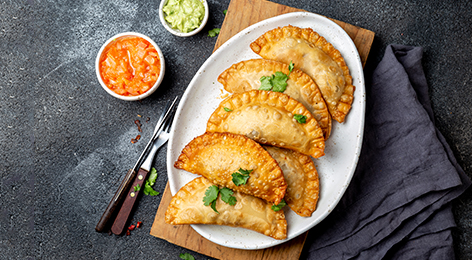 meaning ‘enclosed in bread’ in Spanish, empanada is a type of fried dumplings originating from Spain. Minced meat, boiled eggs, olives, onions, etc. are put into bread to make empanada. 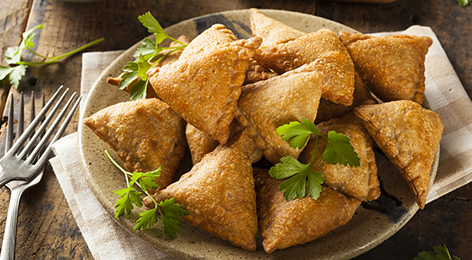 filling made by seasoning peas, tomatoes, etc. with spices gets wrapped in a triangle shape and then fried. With a crispy, thinly-peeling skin reminiscent of pastry, samosa is a popular street snack. 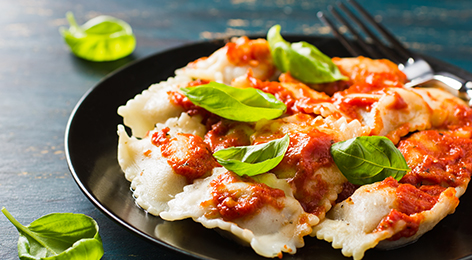 ravioli means ‘to surround’ in Italian. Made by wrapping meat and vegetables in pasta dough, ravioli is commonly served with tomato sauce. 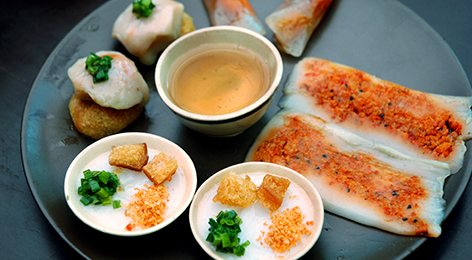 a type of dumplings made from tapioca powder and filled with pork or shrimp meat, banh bot loc is characterized by its chewiness. 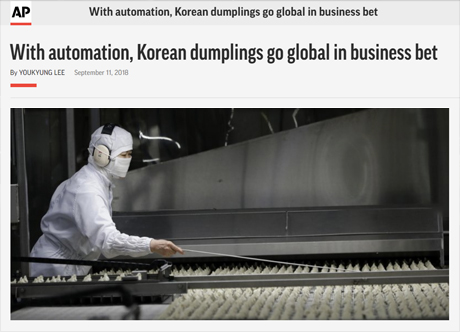 The ‘culinary Korean Wave’
spreading across the globe

Healthy dumplings loved by people around the world, bibigo dumplings

As people all over the world love to eat dumplings, this food has become a major area of competition for food companies. Lately, there has been a new change in the global market, and it is none other than the emergence of bibigo dumplings, which are Korean-style dumplings. CJ CheilJedang's bibigo dumplings, differentiated from existing, thick-skinned dumpling products on the market, have fascinated the taste buds of people around the world with their thin skin and hearty filling.

In an article about the globalization of Korean dumplings, AP, the world’s largest news agency, highlighted bibigo dumplings as a product leading the trend. AP wrote highly of CJ CheilJedang's bibigo dumplings in the article, saying that they have dispelled the negative stereotypes of frozen dumplings and are expanding their global influence as they continue changing the global food market based on unrivaled technology.

Having entered the US market in 2010, bibigo dumplings’ annual global sales reached 100 billion KRW in 2016 and achieved over three-fold growth in 2018, reaching 342 billion KRW. In addition, the proportion of dumplings sales at CJ CheilJedang also increased beyond the 50% mark to 53.7% in 2018, from 2016’s 43%. Driven by such a sensational success in the US market, K-Food is now being introduced into cou ntries such as China, Russia, Vietnam, and Japan through the medium of Korean dumplings. 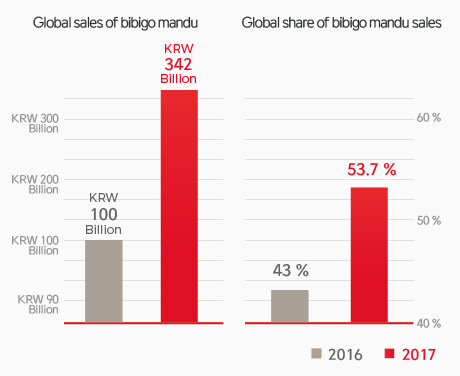 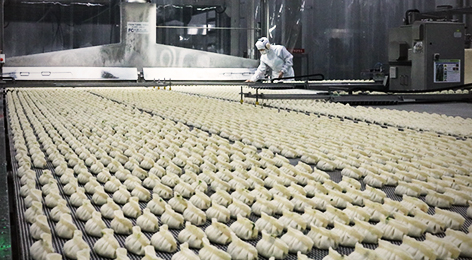 The success of Korean-made ‘bibigo dumplings’ in the global market was no mere coincidence. It was made possible because CJ CheilJedang strategically prepared for its overseas foray based on the quality know-how it had accumulated over many years in the Korean market.

Before venturing into international markets, CJ CheilJedang developed ‘bibigo Mandu’ with the aim of eliminating negative preconceptions about frozen dumplings in the Korean market, prevalent due to their cheap quality. The fillings of existing dumpling products were made from ground vegetables and meat, and having learned that the meaty smell characteristic of existing frozen dumplings is generated during the process, CJ CheilJedang boldly redesigned the entire production process for its dumplings. That is, in order to achieve the chewiness and rich texture of meat, an ingredient most important in building the flavor and taste of filling, CJ CheilJedang adopted a process that involves chopping ingredients with knives. CJ CheilJedang also modeled the appearance of its bibigo dumplings after ‘mimandu,’ a type of dumplings that were served to kings of the Joseon Dynasty, in order to express the elegance of Korean traditional culture. This is why the creases of the skin of bibigo Mandu are particularly pleasing to the eye and have a wave shape.

Thanks to these efforts, bibigo Mandu was able to captivate the taste buds of Korean consumers despite their long-held distrust in frozen dumplings and eventually become No.1 in the Korean market, embedding into their minds the message ‘For dumplings, always opt for bibigo.’ 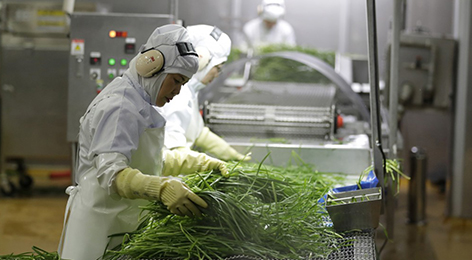 Without thorough overseas market localization strategies, Korea’s No.1 dumplings ‘bibigo dumplings’ would not have been able to win the hearts of people around the world. Choosing the U.S., a country where frozen food is already popular, as the first target overseas market for bibigo dumplings, rather than Asian countries where people have much more in common with Koreans in terms of cuisine, was also a strategy resulting from thorough market research.

CJ CheilJedang researched and analyzed flavors and tastes known to be popular and familiar in the local markets, and released products that had reflected the findings. Two ensuing examples of this practice are ‘chicken dumplings’ which contain cilantro, an ingredient popular among Americans but not so uniformly favored among Koreans because of its unique flavor, and ‘meat and corn dumplings’ which are filled with meat and corn, two ingredients cherished by the Vietnamese.

Not only taste but also packaging materials have been localized. Different packing methods have been employed according to local transportation situations and weather as well as each country’s income level and consumer usage patterns. Thanks to these efforts, the locals became willing to buy Korean-made bibigo dumplings.

bibigo dumplings by country;
the same dumplings yet different tastes 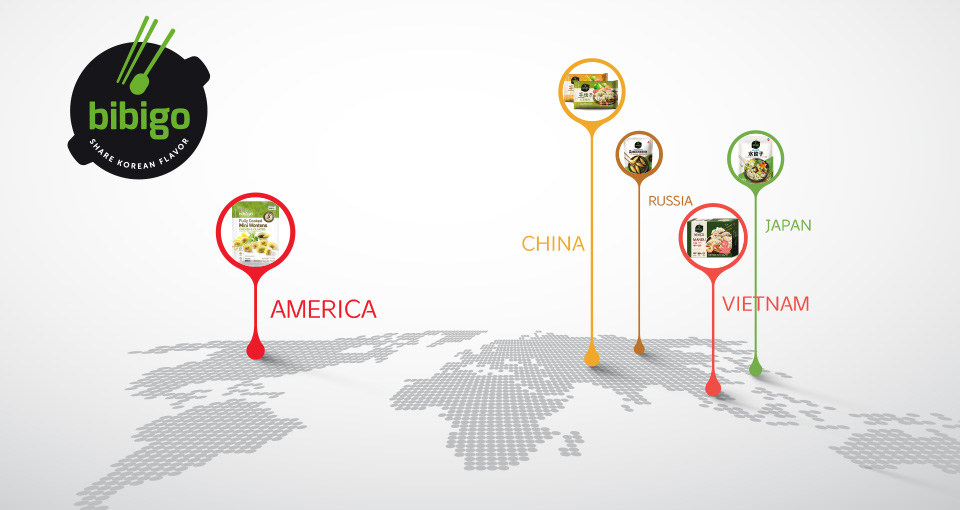 Mini dumplings flavored with chicken and coriander, two ingredients beloved by Americans. This product has established itself as healthy and tasty dumplings as opposed to Chinese frozen dumplings available in the U.S. market thanks to its thin skin and hearty filling.

Exclusively aimed for China, a country widely known as a paradise of food, this product is designed to be enjoyed in a wide range of ways with various cooking methods, including steaming, roasting, boiling, and frying. This product has been flavored with corn and cabbage, two favorite ingredients among the Chinese. 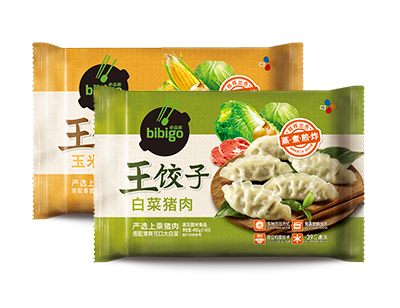 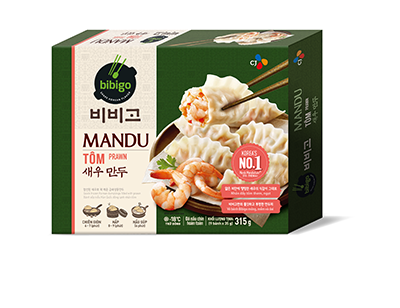 This product is designed with consideration for Vietnam’s hot weather and road infrastructure so that each piece can be packaged on a plastic tray.

This product has been given more savoriness with the addition of ingredients favored by the Japanese such as ginger. Exclusively made for the Japanese who frequently use small dumplings for nabe. 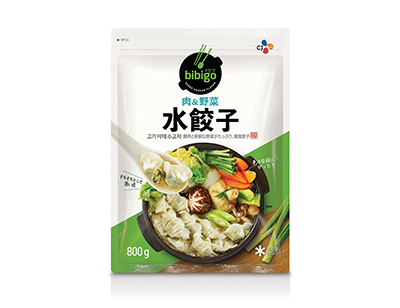 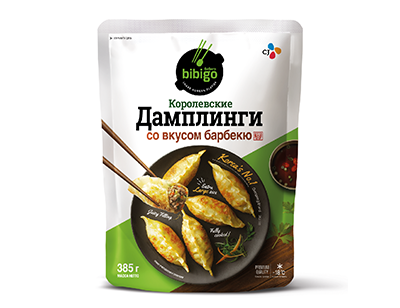 Barbeque-flavored dumplings developed through analysis of pelmeni, a traditional Russian dish with a strong meaty flavor. A product with a thinner skin than pelmeni and a rich meaty flavor created from sliced meat. 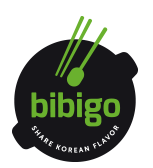 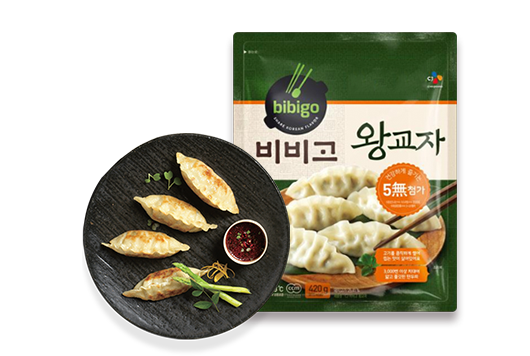 Bibigo Mandu is made in the shape of sea cucumber and the gentle waves of the sea to represent nature’s bountiful treasure for the king. Chunks of fresh pork, tofu, chives, onions, and other ingredients are bound in a thin and chewy skin for the most pleasant texture possible.
Enjoy the exquisite match of fried Bibigo mandu and beer which brings those two great loves together.

‘Share Korean Flavor’,
the globalization of Korean food as carried out by bibigo

bibigo dumplings’ adventure does not end here. In order for people to experience healthy and tasty bibigo dumplings anywhere in the world and, by extension, for us to achieve the bibigo brand's mission of 'Share Korean Flavor’, we are carrying out a broad range of adventurous activities. ‘Cheese & mini wontons’ and ‘Mandu fries,’ debuted at the PGA Tour’s CJ Cup which CJ CheilJedang recently joined as an official sponsor, were also a new attempt at making Korean food become enjoyed in a simple, easy manner.

In addition, as well as conducting yearly R&D efforts and expanding our plants in many countries in the world, CJ CheilJedang also engages ourselves in various marketing activities related to cultural content and sporting events such as KCON, MAMA, and the CJ CUP, leading the culinary Korean Wave craze all over the world.

bibigo is a brand unafraid of embarking on new adventures! We cannot wait to see what exciting future lies ahead for ‘Share Korean Flavor’, the globalization of Korean food as carried out by bibigo.