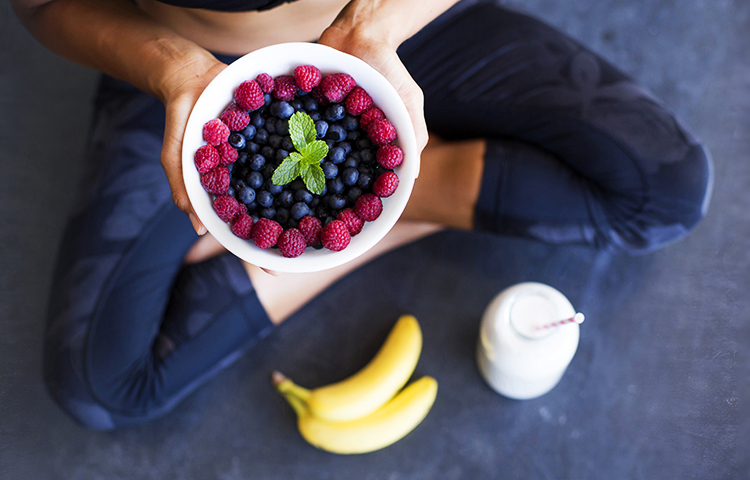 Simply hearing the word ‘snacks’ can make us feel better and excited. And that's probably because when we think of snacks, we are automatically reminded of the numerous tasty treats we've had in the past. Snacks were once even taboo in the past due to their savory flavor and overly sweet or salty taste. In recent years, as more and more people have adopted health-oriented lifestyles, snacks have also been changing in a healthier direction.

Snack time! I'm hungry. Why don't we eat something?
Delicious snacks rather than meal! Let's enjoy them healthy now!

Snacks, little delicacies that help give a lift to our spirits in everyday life

Snacks refer to simple foods enjoyed between meals. As the term is relevant to circumstances rather than to type or ingredients, most foods other than those consumed as meals fall under the category of snacks. When we need some energy or simply want to fill our hungry stomachs during while we go about our daily lives, we tend to reach for snacks. In other words, snacks are a great aid in our lives that provides us with nourishment. Perhaps because of that very reason, a lot of snacks have sweet and refreshing flavors to induce faster results, making us feel better instantly upon their consumption. Sweets, juices, candies, and cakes are common examples of snacks. 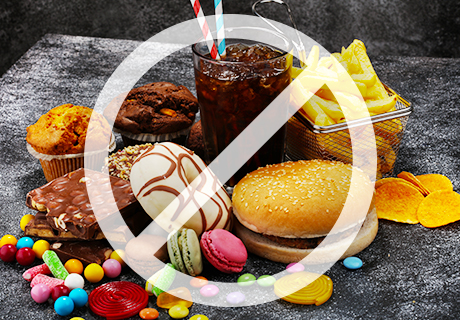 Snacks are great, but they were once taboo

Although snacks provide nutrients and energy to us in our daily lives, excessive snacking can be toxic. It's because most snacks are very high in calories despite their relatively small size. And due to their tastiness, we often end up eating more snacks than we should. If you keep eating a lot of snacks like that, you will surely lose your appetite and eventually develop bad eating habits.
For that reason, snacks were once thought to be food that should not be consumed. This negative perception of snacks began to appear when sugar- or sodium-added snacks, such as potato chips, popcorn, jelly, and soda, started entering the market to win over the taste buds of consumers. As time went on, people naturally developed the idea that snacks are unhealthy food.

Finally, healthy snacks emerged
to suit the lifestyles of modern people who put their health first.

You Are What You Eat!

An era in which you are what you eat

However, snacks took a new turn as “the war on sugar”* really began to get underway and “well-being” became a global buzzword. Such paradigm changes shifted people's desire for snacks as well. That is to say, for their health, people started increasingly seeking aspects like low-calorie and low-salt in snacks. Now, people are much more willing to consume organic and eco-friendly snacks despite their being pricier than the existing snacks, and if they cannot find such snacks at convenience stores, they even go the length of making them themselves at home.
Today, people enjoy snacking on dried fruit, yogurt, and fresh raw ingredients such as clean vegetables and nuts as well as healthy foods that have minimized additive content. In essence, the growth of people's awareness has led to a positive change in the snack market.

* the war on sugar : A metaphor denoting institutional sanctions against sugar consumption Two good examples are the UK government’s imposition of the “sugar tax” and the US government’s mandatorization of separately specifying harmful sugar content for all foods.

The emergence of raw snacks!

The healthier snacks are, the better!

With the exponential growth of the market for healthy snacks characterized by low-calorie, low-salt, and environment-friendly, so-called 'snackable' dried fruits and others like them emerged. In other words, healthy snacks for those into well-being entered the market. According to Nielsen, the famed American market research institute, 600 or so of the roughly 900 packed snack products released between 2012 and 2016 are fruit-related products. These products, called raw snacks in South Korea, are snacks almost completely made from raw ingredients without any additives and are enjoyed raw. Dried fruits, dried vegetables, and nuts are good examples of raw snacks.

As if to demonstrate the popularity of raw snacks, the global raw snack market grew to $21 billion (about 24.765 trillion KRW) in 2016, and given the growth of the Asian market, the global raw snack market is expected to grow further to as much as $27 billion by 2021. This trend has been impacting South Korea’s domestic market as well, which in turn has been exhibiting an annual growth rate of 7% to 8%. 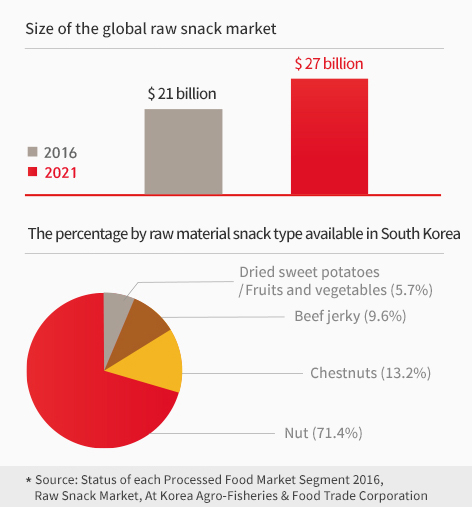 A recent addition to raw snacks, dried fruits & vegetables are very popular because they offer their original tastes and nutrition. Also, as a lot of dried fruit & vegetable products come in small, pouch-like packages, they are ideal snacks for busy students and workers. 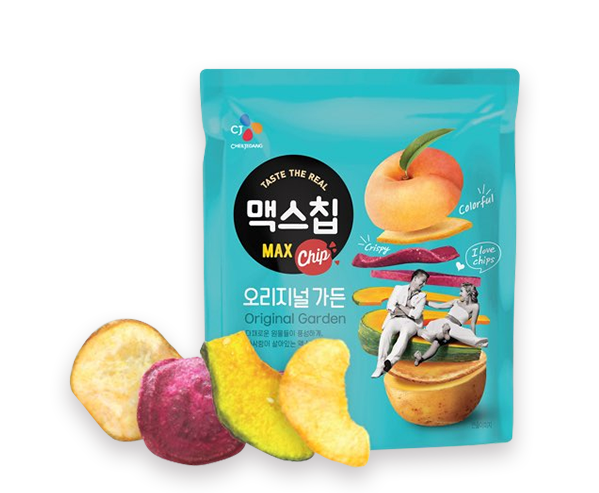 
Why Max Chip is healthy and delicious:

100% raw vegetables and fruits are used for your health!

Extra crispy as each ingredient is cut into slices with the ideal thickness to ensure the best taste!

The shape and color of each raw ingredient are intact! A colorful snack that gives visual pleasure! 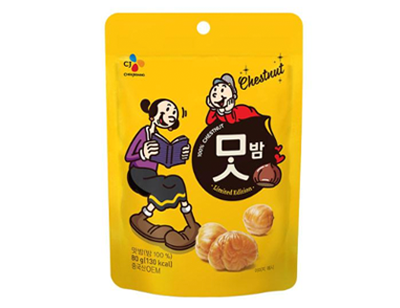 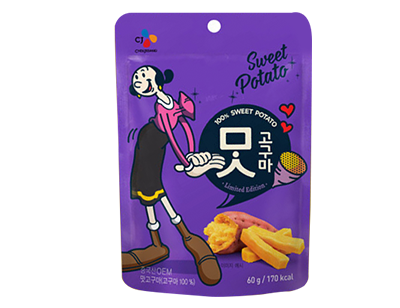 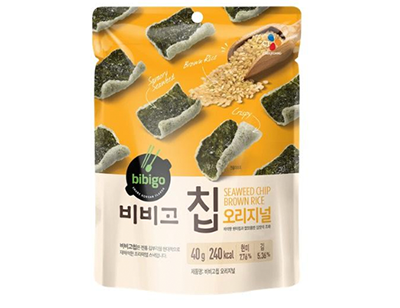 Now, go for healthy snacks instead of meals!

Snacks as a substitute for meals, fast and easily consumed even while you are on the move

Snacks now even reflect changes in people's lifestyles. People's eating habits and tastes are changing as they move on from an age of mere survival to an age in which their primary goal is to pursue happiness in their own lives, and as people’s eating habits change in modern society, the definition of snacks is also changing.
In the past, eating three meals a day was deemed to be a universal eating habit, but with changes in lifestyle, nowadays, many people have developed a habit of eating whatever they want to eat whenever they want. This change has led the definition of snacks to evolve, and now, snacks also pertain to small forms of food, which are becoming closer to meal. Snacks have essentially replaced convenience foods, which are lighter and can be consumed with more ease than meal. In other words, as eating meals is no long necessary for survival in this day and age, the fine line between meals — which have traditionally been considered essential — and snacks has blurred.

The future of ever-changing snacks;
For a more delicious and healthier life!

As such, snacks have constantly seen various transformations, moving beyond an era when taste was the sole factor in creating snacks and into this new era in which the health, nutrition, and even lifestyles of individuals are taken into consideration in the making of snacks. It's really interesting to think that that small snack pouch tucked away in your pocket represents some of those changes in our lives. What other changes will snacks go through from now on? It certainly makes us curious. On that note, we encourage you to try eating highly nutritious snacks instead of meals, while imagining about the future of snacks and their possible transformations.